We made a road trip of ten days visiting hotspots of Iceland. We have never been to a country before where upfront so many people told us it is mind-blowing beautiful. So, expectations were extremely high, but they have even been overtopped!

Of course, we’ve spoken with many Icelanders about happiness and they told us happiness in Iceland is beautiful but though. The internet is full of tips on the best places to visit and greatest things to do when visiting Iceland. Glacier lagoons, whale spotting, bathing in hidden natural pools, walking underneath waterfalls. We’ve selected a few of our own hotspots of Iceland recommended to us by the locals! As Reykjavik has so many amazing spots to offer we’ve selected our most favorite ones and put these in a separate blog.

The golden triangle is seen as the area of all hotspots of Iceland and consists of Iceland’s three most visited sites: the Gullfoss waterfall, Geysir, and Þingvellir. We found an extra happy place to add to the golden circle: Kerid volcanic crater.

Gullfoss – Gullfoss is Iceland’s largest waterfall. Driving wind and rain augmenting the massive spray from the billions of gallons of water that cascade here every hour. This is a pretty incredible waterfall, seeming to fall sideways in a staircase fashion into a crevice that is 105 feet (32 meters) deep. It seems to appear out of nowhere and vanish just as quickly. This waterfall is also known for all the efforts taken to preserve it for the coming generations. The story goes that when European investors attempted to dam the waterfall to provide power and profits, the owner’s daughter threatened to throw herself into the waterfall.

Thingvellir national park – This national park, a UNESCO World Heritage Site, is a narrow canyon, like a great granite scar across the land. When walking through the Almannagjá gorge you end up at the relatively small but stunning waterfall Öxaráfoss. It is both beautiful and full of history and cultural value to Iceland as the Icelandic Parliament was founded her in 930. Geologically explained, it’s the place where the European and American tectonic plates are slowly drifting apart. The park also hosts Þingvallavatn, the largest natural lake in Iceland.

Geysir – A favorite stop along the Golden Circle is the highly active Geysir Hot Spring Area with boiling mud pits, exploding geysers and the lively Strokkur which spouts water 30 meters into the air every few minutes. The temperature of water 20 m down Geysir’s feeder channel is about 125 ºC. It has risen from a depth of 1 to 2 km.

Kerid – When traveling the famous Golden Circle in Iceland make sure you stop at the mesmerizing Kerid volcanic crater lake in Grimsnes. Icelanders believe that after the eruption of this volcano the weight of the cone collapsed into an empty magma chamber, later to be filled with water. You can either enjoy the view from the top walking around the crater or descend down to the bottom taking a look at the turquoise colored water.

Secret lagoon – To end your day trip to the golden triangle a visit to the Secret Lagoon. It is much more real and natural than the Blue Lagoon next to Reykjavik and it is a natural hot spring with the mission to keep it natural and unique so that guests can get the true Icelandic experience. It is located in the small town of Flúðir and it is Iceland’s first public swimming pool having been created in 1891.

Landmannalaugar – This beautiful place is by far Iceland’s most prized hiking destination. Full of geothermal and geological manifestations, the region’s natural park is stunning and colorful! It is part of Iceland’s southern highlands. It is great for one-day trips but also for multi-day hikes.

When entering the park from route 26 (Landvegur) and following the Landmannaleid road with mount Hekla on your right hand you drive through an amazing landscape. A world that has been covered by a large dark blanket. Imagine yourself walking on the moon without needing a space shuttle or space suit. It has such a beauty that words cannot describe. You have to experience it yourself!

Hotspots of the Highlands

Vik – Vik is the most southern town of Iceland and it is the place where they, unfortunately, have the most rainfall of Iceland. It lies over 180 km from Reykjavik. Although it is a small and quiet town it is definitely worth a visit. The church overlooking the town and sea is own of the most photographed sights of Iceland. Just outside of Vik lies Reynisfjara beach that is widely considered one of the most beautiful beaches on earth. Those of you who have seen the Giant’s causeway along the coast in Northern Ireland recognize the basalt columns called Gardar, which resembles a rocky step pyramid. The black pebble beach takes your breath away and a couple of hundred meters out in the sea are the spectacularly shaped basalt sea stacks Reynisdrangar. Just drive around and enjoy all the beauty this part of Iceland has to offer.

Vatnajökull glacier – This glacier is the biggest in Europe and is definitely one of the highlights of Iceland. With a Zodiac, you can float between all the amazing blueish ice rocks. The lake is over 300 meters deep and the home of cute seals. In the midst of the lake, you can hear huge rocks that have fallen of the Glacier slowly melting see them floating towards the ocean. The hardest part of visiting this truly magnificent natural wonder is the confronting fact that over the last 20 years the glacier has decreased with 2.5km from the seaside. And without the need for further explanation, the saddest idea is that the glacier will further diminish rapidly. Ow, and the guides of the Iceland Lagoon team are definitely key to Iceland’s happiness!

Hofn – The town of Hofn is the most southeast part of Iceland we have visited. Hofn actually means harbor. Though repeated dredging has proved necessary to keep the entrance of the harbor safe from sand deposits. It’s a cute fishing town with a harbor, famous for its lobsters. It’s one of the few cities on the south side with some traditional restaurants serving Icelandic cuisine, such as Pakkus.

From Hofn, it’s a convenient travel towards the Eastern Fjords, a route that assures many breath-taking views.

Skaftafell – Iceland’s largest national park at 5,000 km2 is a place of immense natural beauty and one of Iceland’s most visited places during the summer. The variety of landscapes is astounding in Skaftafell. Here you can expect to see lush vegetation, icebergs, canyons, hanging valleys, ice tunnels and arches, glacial rivers, and much more.

Svartifoss – Svartifoss is one of the unique waterfalls in South-Iceland. It is a stunning sight. It is 12 meters high and consists of black columnar basalt formations. You can hardly imagine that this is created by nature. The waterfall has the nick name Black Fall.

Skógafoss . This waterfall is one of the biggest waterfalls of Iceland and situated on the Skoga River in the south of Iceland at the cliffs of the former coastline.

The width is 15 meters and it has a drop of 60 m (200 ft). Due to the amount of spray the waterfall consistently produces, a single or double rainbow is normally visible on sunny days. It is unique because the waterfall comes directly from two glaciers, Eyjafjallajokull and Myrdalsjokull. You can both enjoy this beauty from below and from the top. To reach the top you have to climb 370 steps.

The Icelanders will tell you that a Viking named Thrasi hid his hoarded gold under the falls … we didn’t go looking for it, will you?!

Eldsto Art Cafe and Bistro – Cafe meets volcanic pottery and guest house. Perfect place along the high way in Hvolsvollur. They serve strong cappuccinos, have an exciting lunch menu and plenty of desserts. The cafe is a mix of an American diner with a cute coffee house, including a gallery where selling arts. It’s an atmosphere we don’t mind spending some time and money.

Stretching out from the west coast, this peninsula is topped by a large national park. It’s a great place to take a hike or a stroll along the windy and winding coast. There are numerous hills and mountains to climb, including Snæfellsjökull. This peninsula is full of hotspots in Iceland you definitely don’t want to miss!

Olafsvik – This small fishing town is great for exploring the Snæfellsnes Peninsula coastline and from where you can go on boat trips to see killer and sperm whales just half an hour out of the coast.

Kirkjufell mountain and waterfall – Ow yes, we also took a picture from the ‘most photographed mountain in Iceland’, Grundarfjordur’s beautiful landmark Kirkjufell (Church Mountain).  From different angles, this majestic mountain has different appearances. Its height is 463 meters above sea level. Just across the road, there is the Kirkjufellsfoss waterfall through which the glacial water of Snaefellsjokull glacier flows. Although it is not as impressive as the Gullfoss waterfall, it makes for a beautiful photographing opportunity with the mountain in the background.

Arnarstapi – When exploring the Snæfellsnes peninsula we recommend a stop at the small fishing village Arnarstapi. There is a beautiful walk along the coastline with two beautiful spots: the Gatklettur cliff and which means “the rock with the hole in it”. Just a couple of hundred meters away there is also a rock you can walk over! Again a very popular and magnificent site.

Sunnlenska Bókakaffið, Selfoss – Did you know that per capita Iceland has the highest number of book and magazine publications of the world?! They say that 10% of the country’s population will publish a book in their lifetimes.

A great spot to read one of their many publications is this book and coffee store in the small but beautiful town Selfoss, Here they sell both new and second-hand books. It has a very relaxed atmosphere. 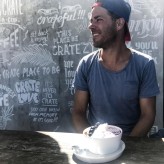